By steve osman4th November 2017 No Comments

It’s exciting, It’s dirty, hot and gritty, not clean, not much greenery, plants die, the wind can rip your face off. Rain is huge and wet, the sky is blue, the sun relentless.

Large rats scurry around. The odour of sewage can take your breath away. Mosquitos are everywhere but these are not normal mosquitoes, these are french stealth mosquitos ! they are arrogant and they BITE in your “général direction”

The Marseillais accent is broad and very hard to understand. The people are colourful and full of character. It’s a melting pot of cultures.

The Panier area of Marseille is unique and full of cafes, shops and bars. Bar Manolo was one of my favourite bars and I had regular gigs there. It was run by Victor and his girlfriend Audrey, two of the nicest people I have ever met in my life.  Unfortunately, due to increasing rent costs, the venue had to close. 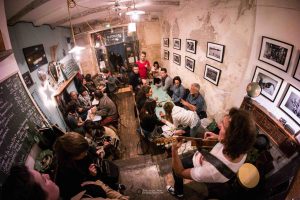 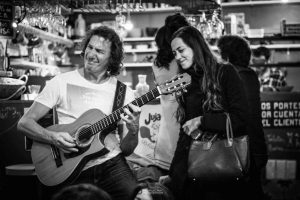 The Bar Des 13 coins is another venue on the Panier with a large outside seated area where I also played regular gigs. This was much to the annoyance of one particular guy, who appeared to live in some sort of dark and dingy hovel, attached to the back of the bar.

He would regularly do his best to assassinate my performances, by basically acting like a total idiot. Generally trying to get as far under my skin as he could. But he did add to the colour of the whole experience.

I would also play regularly on the Vieux Port. Sometimes this was permitted by the authorities and sometimes not. The law is that street performance in Marseille is illegal. However, they turn a blind eye when they want to. But you never knew. This got to me in the end, and I stopped performing on the street entirely. But it was certainly an experience. Often I would be playing and this guy would turn up on his moped, black suit and winkle pickers, and tell me to stop. “It is Forbidden !” he would tell me. Yeh right, unless of course, it’s not forbidden.

I named him Inspector Clouseau, as I never knew his real name. Or what authority he had to ask me to stop either!. But I would dutifully obey if I was ever asked to stop or move. One time I was attacked by a very unhappy human statue. He took a definite dislike to how much more money I was making than he. Then there were the inevitable drunks staggering into me, or kids trying to steal money from my guitar case. 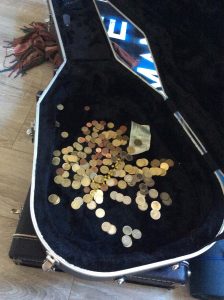 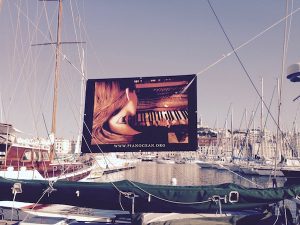 Although you could not rely on it, the money can be good from a few hours street playing and I was doing well. The problem was what to do with so much small change.

Thankfully I soon realised that the self-service machines in the local Monoprix would happily accept all the change I could throw in them and other than some funny looks from the staff, I was able to buy most of my shopping this way.

The weather conditions were harsh. Being burnt by the sun, and dried out with the strong wind did not help me to want to continue street performance.

Often my fingertips would split open as a result of hours of playing in these conditions. And other times I would be sweating so much in the heat that the pickup system in my guitar would simply stop functioning, as it was drenched in sweat and would short out!

Also on the Vieux Port was the venue La Caravelle where I performed several times.

I recall one time I was asked to play there at short notice and I agreed, but the sky’s opened up with rain that was so staggeringly profuse that cars were being abandoned. Roads flooded in minutes.

Taxi companies were not even answering the phone. The concept of walking and also carrying electrical equipment was just impossible, and I lived literally ten minutes on foot from the venue! When it rains in Marseille it’s no joke. It is far more intense than the rain we have here in the UK, but thankfully not so frequent.

View a 360-degree image of Marseille.

After some time it became increasingly obvious that renting in Marseille was killing me. I could not speak the language and therefore was basically seen as a cash cow for any French landlord or agency to try and milk as much as possible whilst they had the chance and I still stupidly hung on to my daft dream of settling in a foreign country where I could not even communicate with the people around me unless they happened to speak English. This pretty much ruled out anyone in authority, anyone working in a bank, basically anyone who did not really have any need to bother communicating with me could very easily avoid the problem!

So having sold a property in the UK some money was available to “invest” in another property and this is where things started to get crazy. I thought that if I got a place in Marseille somehow I would suddenly learn the language suddenly I would have more work coming in and all my problems would diminish.. uuummmm … that didn’t happen.